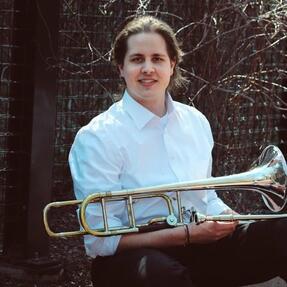 William Riley Leitch is a Chicago area trombonist. Riley has performed at the Nief Norf Festival, soundSCAPE Festival, and the Lucerne Festival Academy where he studied with members of Ensemble Intercontemporain and Ensemble Modern. Riley has premiered over 20 new works for solo trombone, chamber ensemble, and orchestra with groups such as Ensemble Dal Niente and at events and venues such as Ear Taxi Festival and Red Note New Music Festival. His performance and composition focus on deconstructing tradition barriers between disciplines and between performers and audiences. ​ 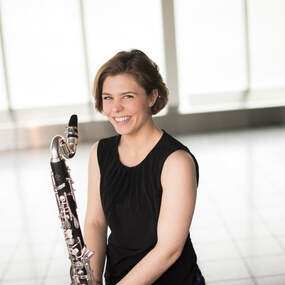 Alex Hecker is a clarinetist and bass clarinetist located in Minnesota. They have performed with the Minnesota Ballet Orchestra, at the Tweed Museum of Art, and with the Lake Superior Chamber Orchestra. Hecker has also performed in contemporary music festivals such as the Nief-Norf Summer Feestival, the Music By Women Festival, and in the Waterloo Regions Contemporary Music Sessions. They currently teach for Saint Paul Public Schools and The Music Coop.

Hecker enjoys exploring contemporary clarinet including electronics, preparation, disassembling, and techniques such has slap tongue, multiphonics, and reed clacks. She enjoys all kinds of music including improvisation and contemporary classical.

Hecker has a B.M. and a M.M. in clarinet performance from the University of Minnesota, Duluth where they studied with Dr. Theodore Schoen.